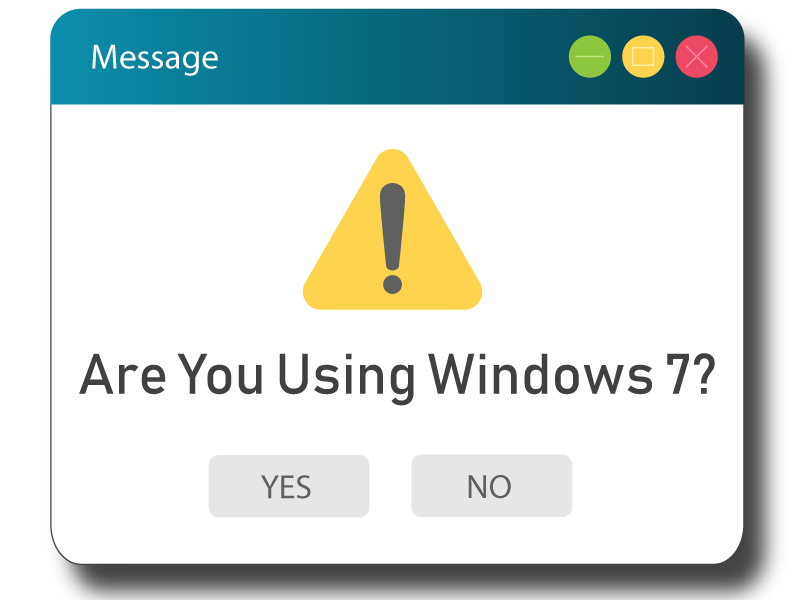 Windows 7 support is coming to an end. Released in July 2009, replacing Windows Vista, Windows 7 grew to be the most popular version of Windows ever. When Windows 8 was release, many people decided to stick with Windows 7, because 8 was too much of a change. Windows 8 dropped the ‘start button’ which caused outcry in the tech world.

Does this mean your Windows 7 computer or laptop is useless?
No. It just means that you will no longer get updates, security fixes or tech support after the January 14th. While this is not ideal, Windows 7 will still work.

Then Why do I need to change?
You may remember the ‘WannaCry’ ransomware attack that corrupted many government & industrial computers all over the world. The WannaCry ransomware attack was only able to infect computers running an outdated version of Windows that was no longer supported by Microsoft. (Windows XP). With security holes no longer being plugged by Microsoft, your computer is an much higher risk of these attacks.

Can I upgrade my Windows 7 Computer to Windows 10?
In most cases, Yes. Windows 10 is extremely compatible with older computers. Having said that, if your computer is running Windows 7, it may be time to upgrade it purely due to its age. Not all computers will be compatible with Windows 10.

Can I still activate Windows 7 if I need to do a re-install?
We understand that the activation server will remain active allowing you to continue to activate your Windows. However, as mentioned earlier, you will not get any updates.

Will Internet Explorer still work on a Windows 7 Device?
Yes, but as the operating system will no longer be supported, the same goes for Internet Explorer on Windows 7. We would recommend installing google Chrome or Firefox if you wish to continue with Windows 7.

What should I look out for if I choose to replace my Windows 7 computer?
We see so many people make a poor purchase decision when buying a new computer. Major retailers now sell computers based on price and if you’re not computer savvy, you may not understand why a $399 computer is so different from a $999 computer. So often we see people buy on price and wonder why their computer is slow. If you choose to replace your computer, please consider what you will be using your computer for. We can assist you with these decisions as well as setting you up and transferring your data. We can even safely recycle your old computer.

Will Melton Computers continue support for Windows 7?
Yes, While Windows 7 will continue to be supported by our team, we do recommend changing over to Windows 10. Our team can assist with updating your tech. Ph: 1800 234 124.