24 Free Must Have Programs for Your Computer 2019 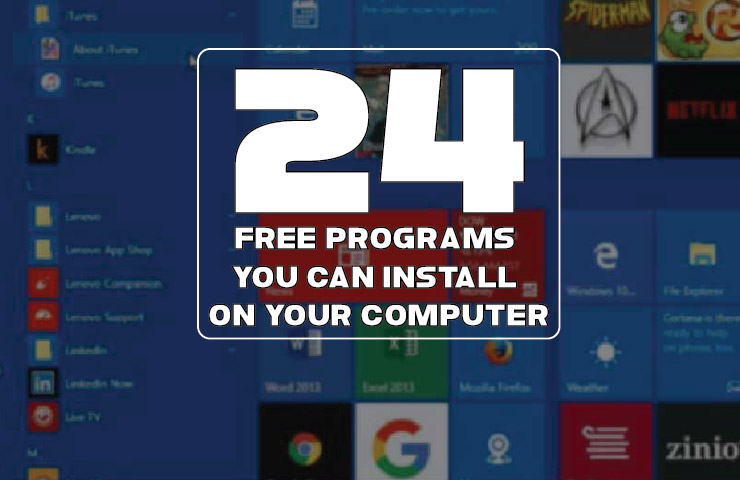 24 Free Must Have Programs for Your Computer 2019

Windows 10 comes with a basic software to get you going on your computer. Here’s 24 programs you can download for free that you should at least try.

Chrome is one of the first programs we install on all new computers we sell. Made by Google, Chrome is available on many devices from Windows, Mac, Linus, Android & IOS.

An alternative to Microsoft Edge, Firefox has been around for many years and is getting better every release. Now with built in Crypto mining and advert-blockers, Firefox is a popular replacement.

If you like to try something different without going to something untried, Safari is a great solution. Commonly used on Mac computers, Safari has a great reputation.

Spotify is well a known program that can run on many devices. Allowing users to stream music from the old to the new. Spotify has a free version, which does play ads, and a paid version with no ads.

Both have paid and free version of the software. Both offer great anti-virus protection for the average user. Bother will unfortunately pester you to buy the paid version. As far as free software goes though. Good additions.

Picasa is widely used to edit 7 enhance photos. Not as featured as paid programs like Photoshop, but Picasa is a well-known and respected software.

Another free alternative to Photoshop with many features to help edit photographs.

Dropbox is a great program that allows you to store files in the ‘cloud’ with 2GB of free storage, Dropbox is great for storing and or sharing files online.

Like Dropbox, Google Drive allows users to store files in the cloud. Creating backups in the cloud has great potential for users. Failing hard drives are no longer an issue if your files are stored safely and securely in the cloud.

The tile is self-explanatory. Folder lock allows users to lock folders with a password. This will make the contents of the folder blank unless you know the password. Perfect for hiding sensitive documents or files.

A powerful software package that allows you to share your computer screen with another user where they can take control of your computer. While TeamViewer is used by scammers, it has great potential for technicians to help clients without an onsite call out.

Nero is a well-known DVD burning program that allows users to copy files easily on to a DVD. IMG Burner is a great free alternative to Nero.

With Microsoft now pushing a subscription-based Office 365 package, Open Office is a great free alternative. Able to open & save Microsoft Office files, Open Office looks and feels like Office 365. Sure, there are changes and it’s not as well featured, but for a free open source program, it’s amazing.

If you decide that Open Office is a better option, you may also consider trying Thunderbird as an Outlook replacement. Thunderbird, made by Mozilla, (Firefox) is a perfect replacement.

After Chrome, Adobe Reader is the first program we install on client computers. Edge does come with a PDF reader, but we feel Adobe reader is a much better solution.

Widely used in the gaming niche, discord allows users to communicate with high quality voice either one on one or in groups.

Windows comes with Notepad. An easy to use note taking program. Notepad++ is a great addition to your computer as it offers great features without the high resource consuming Microsoft Word. Notepad++ is preferred by web developers and programmers.

Google Earth is a fun program that allows users to look at satellite images from around the world. In recent years, Google has added street view and 3d models to Google Earth along with an amazing amount information and trivia about the world you lookup.