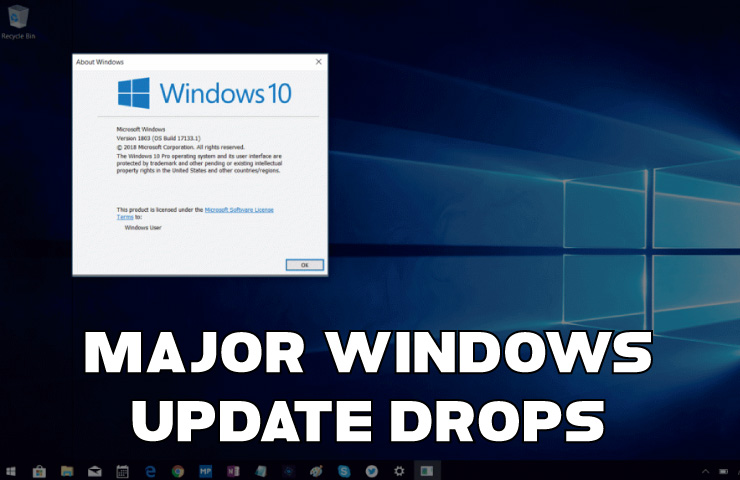 Microsoft has dropped a major update. (The 4th Major Update).

Computers will now start the rollout of Windows 10 version 1803. This will mean multiple update attempts & popups for some users.

This update is between 3GB & 4.7GB depending on your system, so if you’re on a metered or mobile connection you may need to source an alternative place to do the install.

It’s also important to note that not all computers will be eligible for the update immediately. Microsoft will only roll the update to computers known to work with it. This is to avoid downtime and bad user experience.

How can you check your current version of windows? Click on the start button and then type winver and press enter. Your version number should be the on the second line. If it says 1709, you have the latest version heading into 1803.

So, what can we expect from 1803?
Better performance and better security are always at the forefront of Windows updates. 1803 update is no different. There are some ‘features’ that you will see on the Windows 1803.

New feature – Timeline.
Windows timeline helps you track your computer usage through the day. App loads, document loads open windows are now displayed in a timeline form. This is to assist with productivity and help users better track the computers usage. Super handy if you’ve done something earlier but need to go back to it easily.

New Feature - Font Customisation.
You will now be able to add fonts to you Windows easily through the Microsoft App store. Sure, adding fonts in the past has been relatively easy, but now doing it through the app store allows a more trusted payment method and hopefully an easy to use interface.

New Feature – Graphics Customisation
This is for users with more than One video card. This feature allows users to switch graphics cards into a low power mode.

That's about it. If you'd like help installing the latest Windows release, give Melton Computers a call on 1800 234 124. We encourage a data backup before allowing a full update in the event of data loss or failed update. We've seen it before, and we'll see it again.