5 Common reasons your Computer or Laptop may be slow. 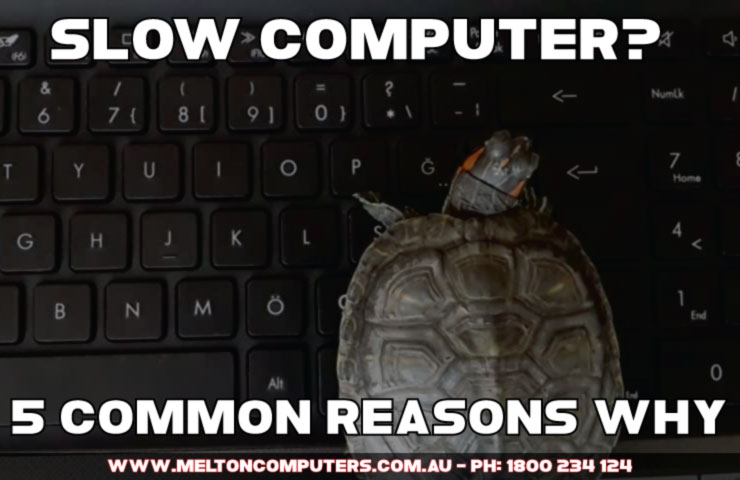 5 Common reasons your Computer or Laptop may be slow.

You have too many start-up programs.
When you buy a new computer, it is normally as quick as will ever be without upgrades. Over time the computer will slow down with every new software package you install. Some examples might include anti-virus software or Microsoft Office. But, from there many other programs can be installed either knowingly or unknowingly. It’s these programs that can take valuable resources when your computer starts.

You have a malware or virus infection.
In the 80’s, 90’s and early noughties viruses were designed to be destructive. You’d get a virus on your computer and without notice all your files would be gone or corrupt. Things have changed a little these days with virus makers now playing a much more calculated game to steal information or empty your wallet. Malware, (or malicious software) sometimes gets installed without the user knowing, stealing information such as keystrokes and sending them back to a central server. Scary stuff. Adware is the process of bombarding you with more ads than normal through forced means. Adware is generally installed into web browsers such as Microsoft Edge, Google Chrome, Internet explorer etc. Not only can malware be very dangerous on your computer, it can also grind your systems processing power slowing it down.

Hard Drive Failure.
A faulty hard drive can be cause for concern for computer users regardless what platform they use. Windows, Apple & Linux users are all susceptible to hard drive failures. Not only can a hard drive failure result in data loss, but it can also result in grinding your computer to a halt. Hard drive failures commonly go un-diagnosed until files go missing to spite the drop in system speed. Repairing the faulty hard drive is sometimes possible, other times a replacement is a better option. If you want a huge boost in speed as part of this process, try an SSD installation instead.

Overheating.
When your computer isn’t able to sufficiently cool itself using the cooling system and heat extraction fans, it will slow
down to generate less heat. This can be cause for concern as a system that overheats regularly can break down the very paste that is designed to transfer the heat away from the central processor to the cooling system. Heat issues commonly start with a build up of dust in the cooling system or when the airflow is restricted. It’s important to make sure your device has sufficient cooling.

You don’t have enough RAM
It’s not uncommon now for computer users to have many, many tabs open when browsing the internet. The more things you ask your computer to do, the more memory it needs to keep up. Two years ago, 4gb of ram was considered normal, now it’s considered a minimum. Upgrading your computer from 4gb to 8gb of ram isn’t as costly as you may think.

Solution
If you’d like to get some more speed out of your computer, give the Melton Computers team a call on 1800 234 124. We’ll come to you and take a look at what is slowing your computer down before making our recommendation.