E-Sports, Whats all the fuss about? 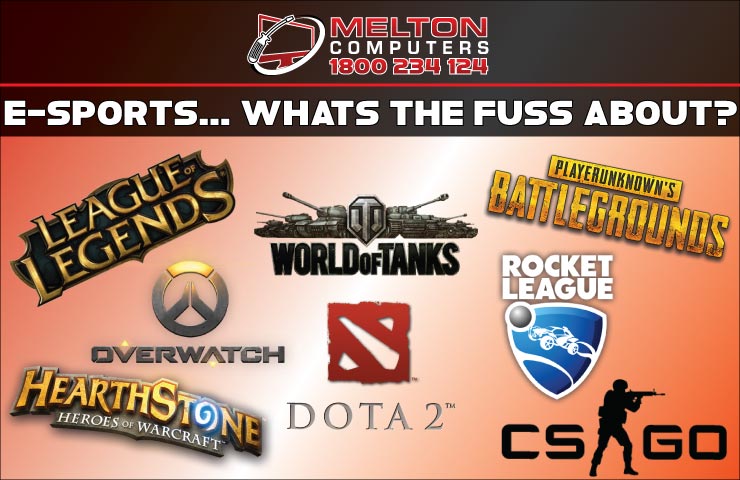 E-Sports, Whats all the fuss about?

Friday night, AFL round 1 and a footy commentator that clearly has absolutely no idea about e-sports made for an ‘interesting’ call during the Essendon VS Crows clash. Brian Taylor to his credit was probably asked to introduce the e-sports team, but his commentary wasn’t exactly respectful. Saturday morning comes around and we see a few posts on Bombers fan pages about e-sports & the lack of respect given by BT. Some of these comments were not exactly respectful either. So, we thought we’d do something about it & explain why e-sports is big business & why it’ll be around for years to come.

For years computer gamers have been labelled as nerdy & techy types of people. This isn’t exactly true, sure, there many more nerdy types in the computer/tech world, that’s only natural, but you’d be surprised how many ‘normal’ folk love gaming. Many homes in Australia have Playstations, XBOX’s or Nintendo game systems in their living room, but for some… its much more than a game. For some, gaming is not only something to do when you’re bored, its an income, and in some cases a lucrative one.

Before we continue, lets take a step back. In 2004, a game was released that around 5.6 million people still play to this day. So popular World of Warcraft has been over the years that some people have made lucrative amounts of money. One of our clients the other day was telling me that he has spent over $20,000 on the game but has made a lot more than that back from it… No joke. It’s that serious for one individual on our client list alone. World of Warcraft wasn’t the first MMO title, but it’s it the one we keep getting asked about.

Now let’s fast forward back to Round 1 2018 and the BT intro of the Essendon E-Sports team. Why is it important? Why did Essendon buy an E-Sports team?

Here’s a couple of snippets
“Esports is the fastest growing sports category in the world and is quickly changing the entertainment and sports landscape,”
“As a Club, we are looking at ways to diversify our business, invest in growth and create new opportunities to drive incremental consumer and commercial revenues.
Juston Rodski. Essendon Chief Marketing Officer

It’s about money & it’s not just the Essendon Footy Club that are interested in e-sports. In-fact, Formula One televised their e-sport racing finals last year & was picked up by Fox Sports as part of the F1 coverage. During the lead up to the finals, over 60,000 gamers had a crack at the going all the way & over 20 million impressions online and was broadcast by Sky (Foxtel in Australia) as part of the F1 coverage. In 2016, the League of Legends World Championship Final attracted over 14.7 million viewers watching players eyeing off chunk of the $5M prize pool. Its crazy but it’s true. E-Sports, is here to stay and there is BIG money behind it.

One thing to remember about e-sports, although not as physically demanding like a football game or a racing car might be, e-sports still requires an amazing amount of concentration, commitment, talent & ability. Its not just about being best in your town, state or country, its about being the best in the world.

League of Legends, Dota 2, Counter Strike: Global Offensive are just some of the most popular games you can play as a newcomer or as the best in the world. The very best, are earning a lot of money… from these games, a LOT of money. If you’re the best in the world at something that is marketable… you stand to make good money from it. E-Sports is becoming increasingly popular and whether people agree with it or not, we expect competitive gaming or e-sports to be around indefinitely.

Melton Computers have built quite a few gaming rigs recently, if you’d like a quote for a gaming computer, please let us know. Call 1300 234 124 & we’ll work out a gaming solution for you.